By ErDiCooperNovember 1, 2017Dev Updates
No Comments

This week’s Dev Update is going to be a little shorter, structured less as a “here’s what’s going on” sort of update and more of a show and tell! Something we’ve always envisioned for Gears of Eden was the ability for players to upgrade their character in various ways, ranging from sleek and stylish modifications that you hardly notice to… well, things a little wackier. You’ve seen a very, very basic stage of this in the Alpha, but that was just sort of a proof-of-concept. We didn’t have a modular player model, so we just wanted to make sure we could demonstrate the basics of the system and change the character stats. That’s changing fast though! Already, we’re designing the visuals for new parts and discussing what works and what needs a little more oomph to really sing for us. 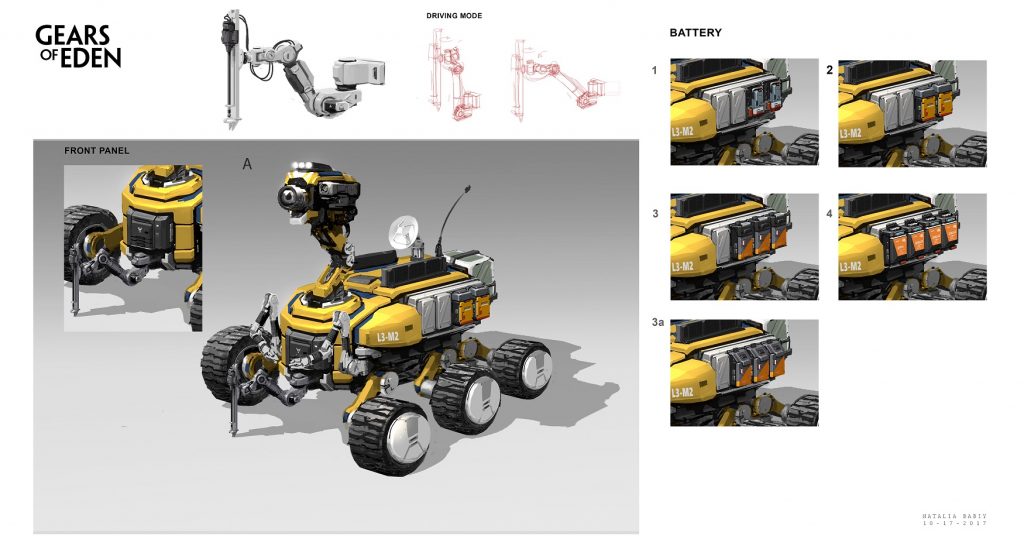 One of the first areas we started playing around with was the battery.  In this image, you can see various levels of upgrades that we’ve been considering. One of the first things we noticed was that, with that fourth stage, we didn’t feel like the upgrade felt significant enough. It’s the final stage (at least of this line), but it’s really just one more battery pack. After giving receiving that feedback, our concept artist came back with… 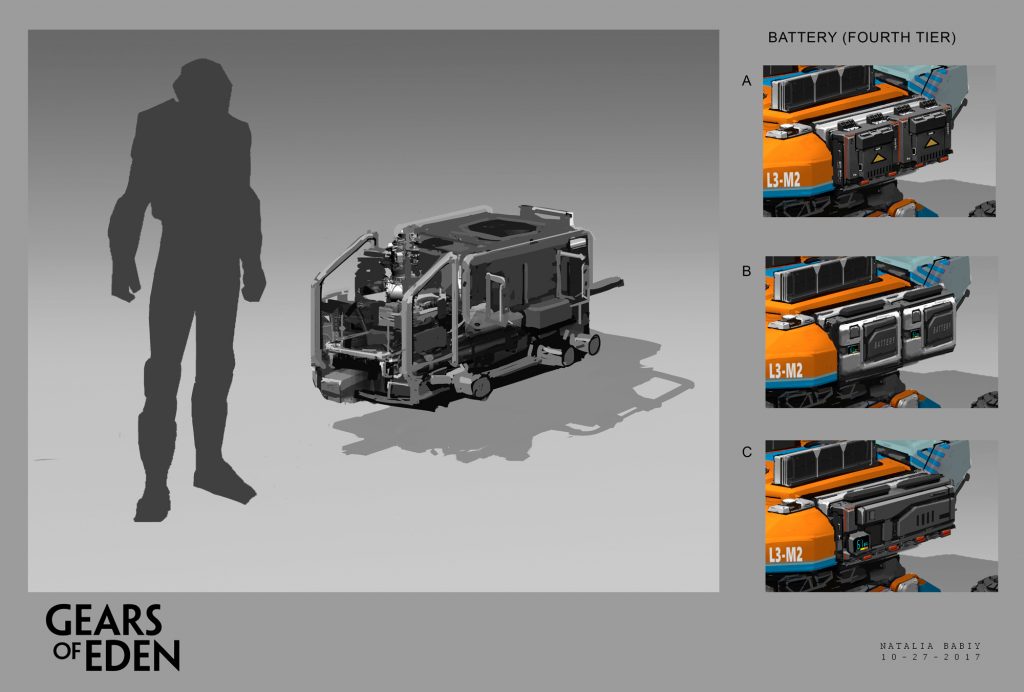 This! Now, I’m partial to version C, but I know I’d be stoked to get any of these at that final level! That’s important to us. We want to make sure that the player can look at a new upgrade and think “Yup, that’s better than what I used to have,” but we also want that upgrade to feel satisfying. It makes sense that the lower levels of an upgrade line might be a little more basic, but when you hit the last stage? It should really pop and make the player feel glad they made the investment of time and resources! But there’s something else about this art, right? 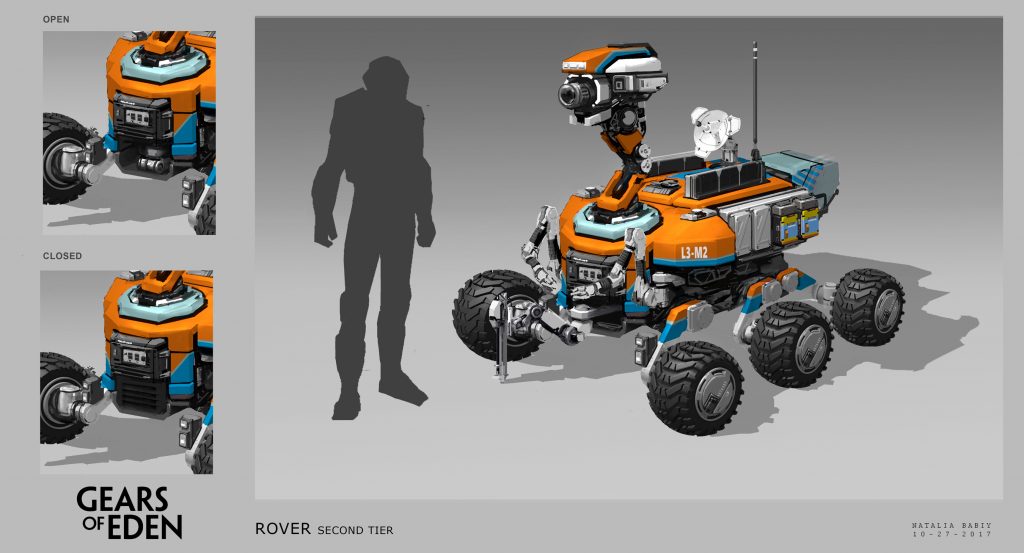 It’s the paint job! Not only do we want modifications that upgrade your play-experience, we want you to make modifications that help make it your very own experience. In the recent Super Mario Odyssey, there’s this dress-up mechanic where you can buy new outfits for Mario and honestly? It’s a little silly! It doesn’t change a thing about your ability to actually approach challenges… it’s just fun. These are games, right? Lets have some fun. 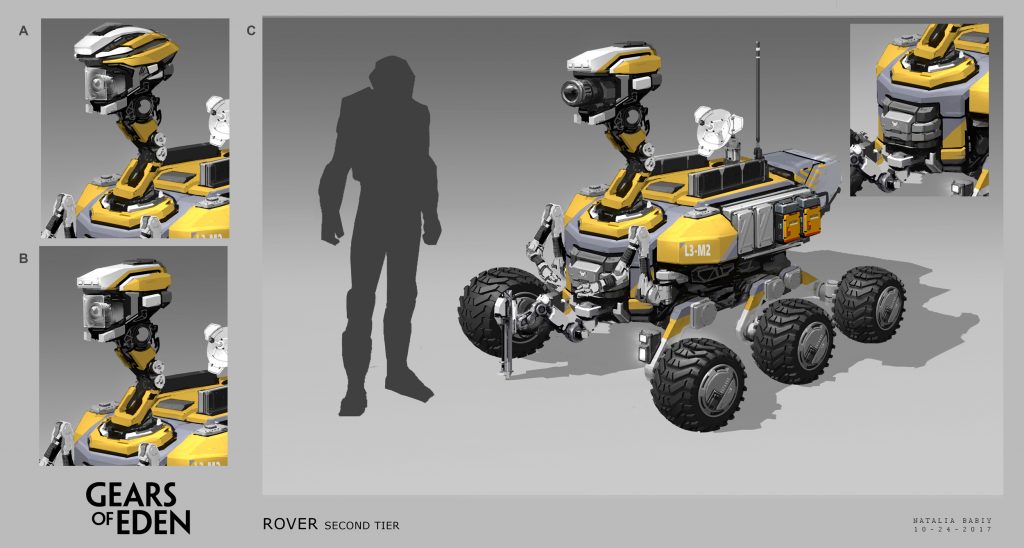 Those first two kinds of modifications are pretty easy. Sure, you upgrade your robot so it can do better. That makes sense. And yeah, you can make cosmetic changes to your character. That’s just a lot of fun! We have this other aspect though that we’re still figuring out: head modifications. We think it’d be a lot of fun if you could switch out the head-part for your player as you go about the game. It’s like getting a new haircut! This is one change that we definitely want to be meaningful though; we want it to have some influence, however small, on your experience in the game. We’ll continue talking about this one for a while, you rest assured.

We’re also going to keep developing more modifications! Right now we’re thinking small to give ourselves a baseline, but we hope to give you some very fun options in the final release. Until then however, be sure to follow us on Twitter, Facebook, and Patreon for more updates like this one! And be on the look out for our upcoming Reaching eden podcast with Skelattack’s own David Stanley. Thank you so much for reading and we hope you have a great rest of your week!