By ErDiCooperMay 1, 2017Fan Feedback
No Comments

Overwatch‘s most recent event (Overwatch Uprising) will be ending today, which leaves me in an annoying place. With this event comes a new batch of skins that were only available for a limited time. Now, I managed to get my hands on most of the ones I wanted, but there are still quite a few that I want. McCree’s new skin looks pretty awesome, and what lover of Torbjorn’s eyes didn’t light up at the prospect of a skin that shaved off his beard? There’s no time for me to earn enough lootboxes to get these rare skins through leveling up alone, but there is another way to get lootboxes: I can buy them. I’ve done it in the past, grabbing $40 worth of lootboxes for both the Holloween and Christmas events. This time though, I already have most of the skins I want … does it really make sense to spend extra money on the chance to get the few stragglers? 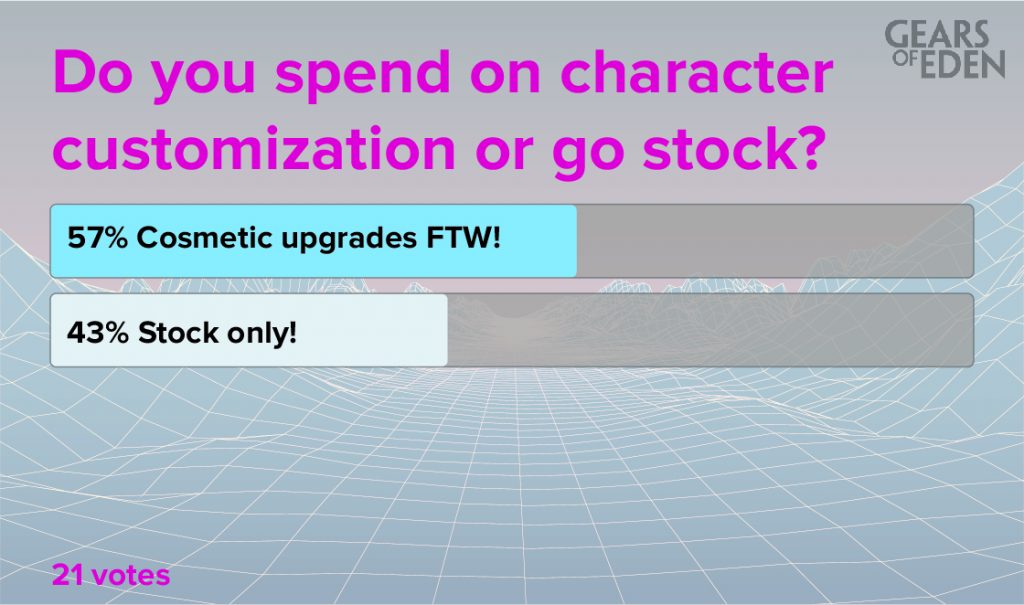 My example is Overwatch, but it could apply to nearly any other online game. I’m sure most of us have found ourselves in a situation like this, debating whether or not to spend money on something that we know doesn’t matter. We decided to ask you about it last week, to see how you felt about this sort of cosmetic DLC. It’s fun to watch as the narrative over time changes. I imagine if we’d made this poll even just a few years, that “Stock only!” option would have taken the vast majority of the votes, and the replies to the poll would have been filled with strong, heated words about the matter. Today however, we seem to have softened to the idea, either accepting that they exist or even being more than happy to pay for a cosmetic change that we really like.

This is, of course, different when it comes to Single Player experiences like what we have in Gears of Eden. I still believe that we as a gaming community have moved on from the vitriol that once sprang up at this topic, but I feel like most players would be less willing to pay for a new paint job if they knew nobody would end up seeing it. That makes sense, right? Personally, I don’t mind it (again, I’ve spent $80 total on Overwatch skins), but I also find a very real amount of joy in earning cosmetic upgrades. I’ve literally bought games simply because I knew you could unlock a bunch of different people, even if they all played the same! I think, in Single Player games, if you plan on employing cosmetic DLC, there’s a balance that you need to strike. The added content certainly needs to be worth the cost, but the options available in the base game should be just as fun and satisfying to get. I guess, said like that, this is true for all DLC, isn’t it?

Naturally, this is on our minds when thinking about the future Gears of Eden. Don’t get us wrong: our primary concern right now, first and foremost, is to make sure the game is actually good and that people know about it. At this stage, that needs to be the focus! But as we move forward, we want to make sure we have a game plan for how we’ll handle monetization so that hopefully, after Gears of Eden is finished and shipped, we can keep doing what we love! We don’t know if we’ll be using cosmetic DLC or not, but with the success that model has been showing, it would be imprudent to just ignore it.

When it comes to dialogue in #adventure #games, do you prefer mute (Portal), scripted (Uncharted) or choice (Mass Effect)? #gaming #pcgaming

That’s all for this week’s Fan Feedback, but as always, we’ve got another poll for you! We’ve been talking a lot about how the dialogue in Gears of Eden should be handled, and we thought it might help to get another perspective: yours! Be sure to vote, and be sure to come back next week to see our thoughts on the matter. To see that post (and everything else Gears of Eden), follow us on Twitter or Facebook! We’ll be on Wednesday with our weekly Dev Update, but until then, we all hope you have a wonderful week!