Fan Feedback: Will You Switch?

The gaming world is currently abuzz with one topic in particular: Zelda.  This latest title in the classic Nintendo series, Breath of The Wild, is being heralded as the greatest game in the franchise since A Link To The Past, one of the industry’s most formative games.  Some are even going as far to outright call it better than Ocarina of Time!  I personally missed that boat (blame Spyro!), but even I am all sorts of jazzed for this game.  Whether you’re drawing fan art of Urbosa or couldn’t care less because you’re just too gosh dang hyped over Gears of Eden, the Nintendo Switch is one of the biggest things going on in the gaming world right now, it only makes sense to see what our community is thinking of it! 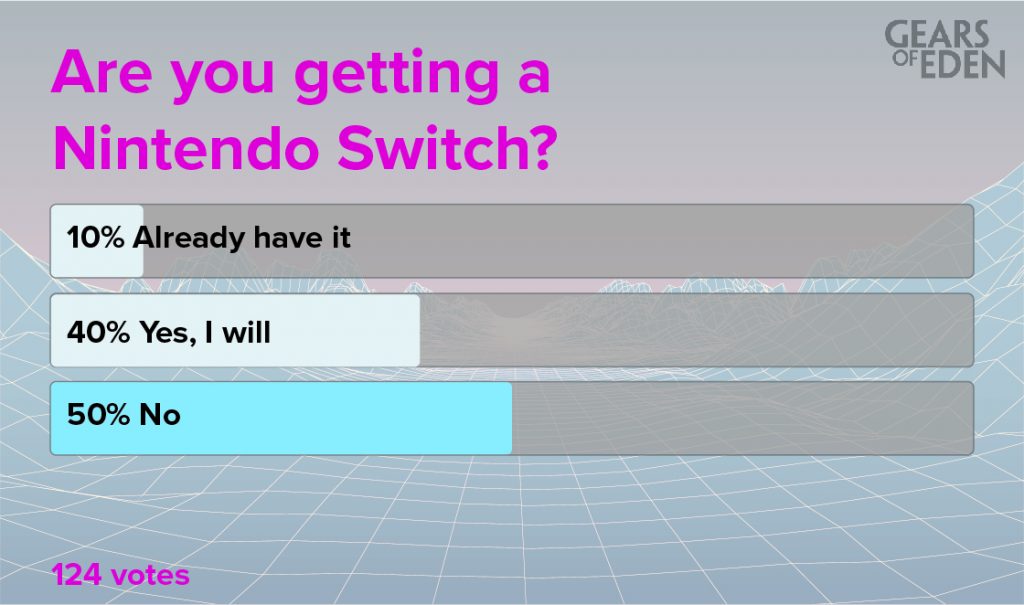 Now, Nintendo has been known to put out initial releases of basically anything that’s not software that fall noticeably short of demand, so when we saw that only 10% of Gears of Eden community members who voted had gotten their hands on a system, it didn’t surprise us!  What was surprising however, was how evenly split you all were on whether or not you even wanted one!  It makes sense though, in hindsight.  With it’s current catalog of games, it’s basically a Zelda Machine that’ll cost you $300.  Right now, you have to just sort of hope that you’ll end up with enough good games to justify that original cost barrier, right?  Then you have the large number of indie gamers that are big fans of the PC ecosystem which, believe it or not, doesn’t exist on a Nintendo console!  Personally, I’m holding out for now, but will crumble the very moment they announce a Monster Hunter game for the system.  Or the moment I get rich.  Breath of the Wild just sounds too great.  Like, even the gifs are fun! Games are so good.

#Gamers, when it comes to mods for games, do you… #gaming #mods #indiegame #indiedev #gamedev #pcgaming #gamersunite Please ReTweet!

That’s it for this week’s Fan Feedback, but we’ve already got a new poll up and ready for you this week on game mods!  We’ve heard whispers of an interest in modding, so we thought we might see what the larger Gears of Eden community thought about that!  And hey!  While you’re voting, considering following us on Twitter, or telling your friends about us!  Or your family!  Does your dog like games?  Tell your dog about us too, just in case.  I’ll be back later this week with our Dev Update, in which we share the week’s development progress with you all.  Until then though, I hope you have a wonderful few days!