This week, we sat down for a writer’s meeting to figure out exactly what amount of story is going into the upcoming alpha build.  The alpha obviously won’t have the complete story of even the demo included, but we wanted to put something in, just so there’d be a small taste.  We decided that our best route would be to simply include some lines of dialogue during the opening “scene” of the game.  This way, we can still give you a certain level of that characterization and direction our game will take without postponing the alpha for months while we put together a serviceable cutscene.  We might include some lines for actions that the player performs, but that still needs a discussion to see whether it’s worth whatever delay that might cause.  As a reminder, the demo and the full game will have fully fleshed out and serviced stories, we’re just not doing that for this early, early alpha.

While that’s going on, our art team is hard at work on our base interiors.  Not to give away any spoilers, but this will be an important facet of the demo experience, so we want to make sure this is properly nailed down.  On a personal note … it’s just such a relief to see the work they’re doing.  I can write and I can study game design.  I can even learn to program!  But you know what I can’t do?  Design and sculpt a model or a texture.  Art is hard, and it’s one of those little choke points that, as an indie developer, I had in the back of my mind as a possible end to the project during the early part of our development process.  I am highly grateful to them, to the programmers, and every other member of this team who is able to rock the things I know nothing about.

Speaking of the programmers, they’re hard at work on the “Spider-Rover” bug.  Apparently, when working with a spherical surface to travel across, gravity gets pretty tricky.  I have no doubt that they’ll figure this out soon.  Until then, I’m just going to be continuously amazed with the Super Mario Galaxy games, making it just look so easy!  The programming team is also working on some of the base’s functionality, which right now has it focused on a machine designed around construction, for both the base and the rover. 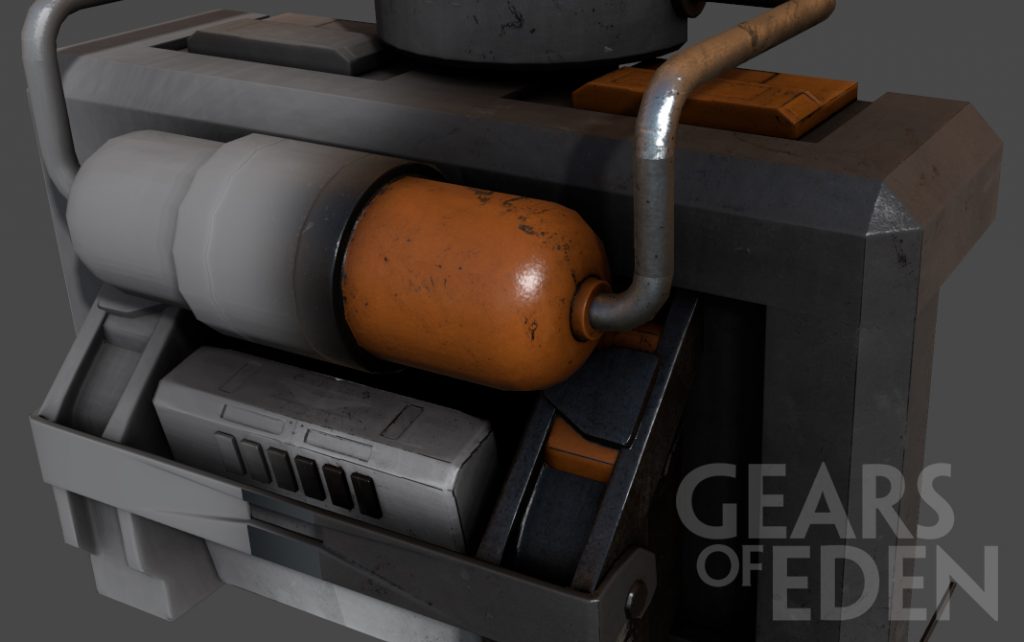 That’s it for this week’s update though, but we’ll be back next week with more.  Until then, be sure to follow us on Twitter and Facebook for all of the latest on Gears of Eden!  Thank you for reading and I hope to see you again soon.