We write these blogs every week because, here at Gears of Eden, transparency is king.  We want you to know our successes and failures. We want to be transparent so that you can be just as excited as we are with development progress.  This only extends so far though, what with you not actually working on this game.  So, when I looked at what we’ve been accomplishing this week, I’m at a bit of an impasse.  Internally, of course we’re excited; we’re polishing the game and finishing the systematic groundwork required to start building the adventure part of the game!  But polishing isn’t very exciting is it?  And it’s the holidays! Religious or not, many of you are getting a much needed break right now, and that’s worth a celebration all on its own.

So that’s what we’re going to do today.  We’re celebrating!  This week’s Dev Update is going to be a little on the short side, but I thought it’d be fun to share images of the progress we’ve made this year, starting with the beginning: 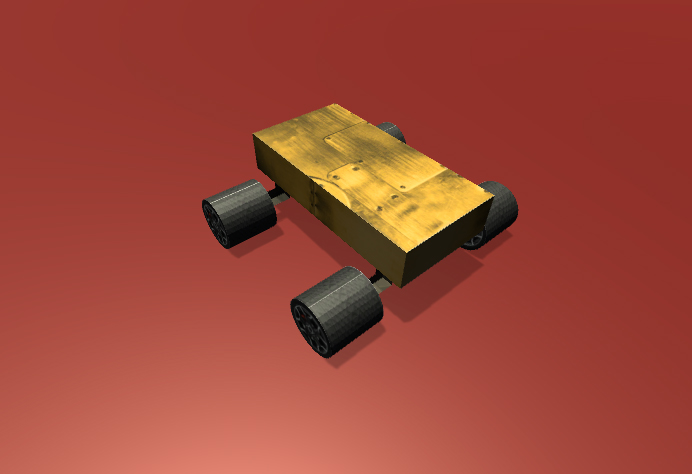 One of the common pitfalls of creative types is that we get so caught up thinking about oh-so-cool things we’d loooooove to make, but we never do anything with those ideas because thinking about doing something is far easier than actually doing it.  Other types, like our own Ben Sledge, take those ideas and use them as inspiration to learn a skill … in this case, learning how to play around with Unity.  His first creation that he brought to our group chat was The Plank Rover.  It’s ugly, poorly modeled, and I’m not actually sure those tires turn, but it served as a crucial springboard to making Gears of Eden happen.  In fact, I’m not convinced that any of this would have happened without The Plank Rover.  I sure as hell wasn’t going to get this started; I only joined on initially because of my own sense of social awkwardness thinking it’d be rude not to get involved with a friend’s multi-year long creative endeavor.

I’m not even joking.

Game design is a process of increments.  It’s like building a LEGO set.  A piece here, a piece there, and then you repeat until you suddenly have fully constructed Millennium Falcon on the kitchen table.  I tell you this because, honestly, as the development process has gone on, I’ve barely noticed the shift from the third and fourth images shown above.  Sure before that it’s easy; you go from a possibly endless expanse of salmon to a grey, roughly textured surface that you can actually fall off the side of.  But after we made the asteroid a 3D surface to drive around, a quality product meant a series of small, individually insignificant updates that when put together become just so fun.  Also, notice how in the third image, the wheels had fallen off the Rover.  That was such a problem for such a long time that when it finally got fixed, I had my first feeling of, “Whoa, we can actually do this!”

We have had an amazing year, and I can’t wait to see what we accomplish in 2017!  Thank you so much for your support, it has been absolutely crucial as we’ve found our footing, and I hope you continue to stick around.  If this is your first time checking us out–Welcome!–be sure to follow us on Twitter and Facebook to get all of the latest updates on Gears of Eden.  Soon, we’ll be releasing our first Alpha Build and would love if you were to participate … and the easiest way to do that is to sign up for our newsletter, which automatically puts you in the drawing to win one of many alpha keys!  We’ll see you next week and I hope you have great week until then!